Rupert Murdoch is not the enlightened leader of free speach and free media. 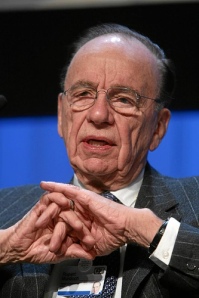 Rupert Murdoch, not the leader of the free press, like some Italians would like to believe. Photo thanks to World Economic forum

This might seem like an obvious comment to make, but Rupert Murdoch is not an all enlightened leader of liberal journalists bringing the truth to the door steps of billions of people.  I say this, because just recently there has been a wave of people who seem to be getting rather confused about this issue.

The Times recently ran the lead column of “Google’s decision to pull out of China was the right one” (I will come back to this later).  Equally, I recently had the very bizarre experience of attending a protest outside the European Commission about media monopolies in Italy, when friends of mine starting to suggest that Murdoch’s media empire represented a “truthful form of journalism”.  This can surely only be the case when comparing it to the lowest forms of media monopolies, such as is found in Italy.

Lets make this abundantly clear, Murdoch runs a media empire which has sticky fingers in quite a few pies; to name a few…The sun, The Times (UK), Fox news, BSkyB, The News of the World, Star TV, The Australian, New York Post and The Wall Street Journal.  This would be bad, just by itself, but this does not take into consideration Murdoch’s political nature (that’s right it’s not only Berlusconi who has political interests). Murdoch has a long history of sticking his nose in.

Throughout the Thatcher years, he aligned himself closely with the Iron Lady and soon after that The Sun accredited itself for ensuring John Major won his election in 1992.  Since then however (until recently) he has thrown his weight behind New Labour.  If Murdoch is one thing, he is pragmatic.  In 2008, he flew Cameron on his private jet for talks predicting a New Labour implosion.  It is not just in the UK, in the US; Fox news is notorious for its Republican bias. Yet, just recently there has been a reported “Truce” between Obama and Murdoch.

Perhaps, to try to live up to his Italian counterpart (who owns AC Milan FC), Murdoch offered 625 million pounds in 1998 in a bid to take over Manchester United FC.  Then, the largest amount ever offered for a football club.

Murdoch is truly a pragmatist! To illustrate, lets look a little closer at his paper running the Google headline.  Murdoch who, axed BBC world service off its Star satellite service Asia after it mentioned the Tiananmen square massacre, ordered the publishing house Harper Collins to drop Chris Pattern’s memoirs of his time as governor of Hong Kong, encase they offend Beijing and paid 1 million dollars for the rights to publish the life story of Deng Xiaoping to get in with the Chinese government (All this can be found in the 22 Jan – 4 Feb Private Eye) is in no position to comment on Google’s activities.  To call Google “parasites” for their action in China might seem just a little hypocritical.

Murdoch remains at the helm of the world’s second largest media outlets (after Disney), and I personally would not believe a word any of his outlets print!

Increasingly however, alternative media outlets have cropped up.  Grass-root initiatives such as Indymedia provide first hand accounts of news without the necessity to make the millions of dollars that the likes of news corp.  This organisation was born out of a frustration of lack of accurate coverage of the WTO protests in Seattle.  We can take organisations like these with a small pinch of salt.  Yet, I would trust these guys over Murdoch any day.  I challenge anyone to read a couple copies of private eye and not become just a little sceptical.

2 responses to “Rupert Murdoch is not the enlightened leader of free speach and free media.”