Iran makes a mockery of the UPR 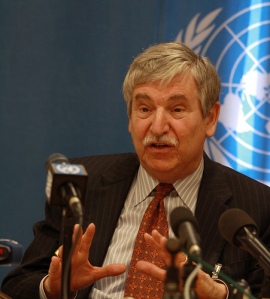 The International Community in a diplomatic deadend with Iran! Ambassador John W.Limert. Photo thanks to US Mission Geneva

I have blogged before about the shrinking diplomatic options open to the international community when dealing with Iran.  I concluded then, that the only path left open was the UN UPR process.  It appears Iran has put the final nail in their diplomatic coffin by refusing to take up some of the most basic recommendations that the UPR made.

Iran refused to accept the recommendation that it end the practice of executing juveniles, upholding fair trial guarantees and investigating torture allegations.  Perhaps the biggest blow was their refusal to allow the Council’s Special Rapporteur on torture to visit the country.  If they will not even play lip service to such basic demands then what hope is there of any effective change within the country?

There is however, one last hope – Iran’s diplomatic schizophrenia seems to have come out once again during this process.  They accepted some recommendations while rejecting other similar recommendations.  There is potential for random positive acts to occur, but this is far from sustainable.   We cannot allow their regime to dictate when it will coöperate; equally we cannot risk casting them off into the diplomatic wilderness where human rights abuses can occur unchecked.

If we want real progress for human rights in Iran, we need the authorities there to start living up to their responsibilities; such as their commitments under the Convention on the Rights of the Child not to execute juveniles.  It is up to the International community to keep banging the same drum asking the Iranian authorities to act.  It may feel like it does nothing, but what other options are available?

2 responses to “Iran makes a mockery of the UPR”