Sudan – Where wearing trousers can result in being lashed 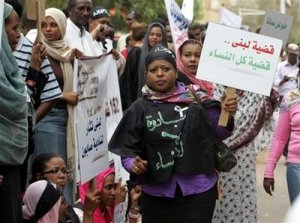 Trousers are many things, but “indecent and immoral” I would argue they are not.  Last year in Khartoum 13 women were arrested for wearing trousers in public.  The women were charged under the 1991 Criminal Act for “indecent and immoral dress”.  Putting to side (momentarily) the law itself; the subjective decision that declares trousers to be immoral is seriously questionable.

Of the 13 women arrested, 10 pleaded guilty and received 10 lashes, while the others received much harsher penalties.  This case, highlights a much more serious problem in Sudan, the public flogging of women (and girls) for a variety of issues.

In Sudan (although it varies state to state) behaviour such as dancing to close to someone of the other sex, the singing of certain songs, sitting on certain seats on public transport, queuing in certain places as well as dress is all restricted.  The penalties can include the flogging of the individual.

Lashings can often be handed out immediately with the defendant having little or no chance of legal representation or the chance to contact their family members.  There have been cases documented of children as young as 16 being flogged.  This is despite the Sudanese Interim Constitution clearly stating, “No person shall be subject to cruel, inhuman or degrading treatment”.  One has to question, what they consider to be cruel and inhuman if flogging of young girls is not considered to be so?

This whole situation leaves women living in fear. The broad nature of this legislation means that a wide range of behaviour can be deemed “illegal”.  You never know when you might be accused of acting “immorally”.  It could be through a simple act such as the wearing of trousers