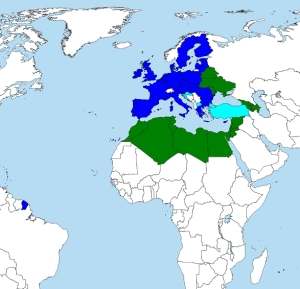 The European Neighbourhood Policy (ENP) was established to create a block of 16 countries bordering Europe’s land and sea that would be given beneficial trade access, visa liberalisation and financial support. In return these 16 countries agreed to a series of political and social reform.  In light of the radical changes which have swept across the EU’s borders in recent months, it is worth taking a second to look at what changes have occurred within the ENP to reflect these global events.

Firstly the ENP has introduced measure for greater involvement in resolving protracted conflicts (aka Libya). As suggested, this translates as “can we have some help in Libya please”. Specifically, change is focused on improving post conflict reconstruction efforts.

Secondly, it looks like the will be extra sources of finances made available. There will be an extra €1.25bn in EU ENP development funds for the period 2011-13. The European Investment Bank’s (EIB) lending capacity to the southern neighbours will be increased by €1bn. The European Bank of Reconstruction and Development (EBRD) will extend their operations to MENA, starting with Egypt. These are big old figures not to be over looked!

Thirdly, there promises to be greater movement between these countries – but – in return for much much stricter border controls. With civilians streaming out of Libya, little else would have been accepted.

These are huge changes that could easily have gone unnoticed (especially to us Brits on our island). These changes fundamentally alter the way the EU interacts with its neighbours. My worry is quite HOW reflective they are of current events. We have war…we need allies. We have a broken country…we need reconstruction. We have a refugee problem…we need tighter borders. Do we really want a foreign policy which is quite this knee jerk (even if you do support some of the changes)?

It is amazing how quickly the EU can move when it wants to!