In 2004 the International Court of Justice (ICJ) ruled that the separation barrier that had been constructed by Israel predominantly on Palestinian land was illegal. The ruling stated that

Significantly however it also stated that,

“all States parties to the Fourth Geneva Convention…have in addition the obligation…to ensure compliance by Israel with international humanitarian law”.

This includes the UK. 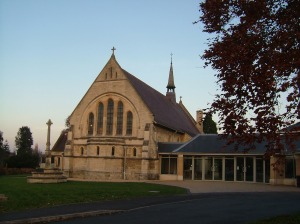 raised this point when I spoke to the ‘Men’s Prayer Breakfast’ at St Andrews Church in Gloucestershire. I finished my talk with a request that each member of audience writes to their MP to ask him to remind the Foreign Office of this ruling and to ask how the government feel they are fulfilling this obligation.

I had been invited to talk about my experiences of working in the occupied Palestinian territories. I have recently returned from 5 months of doing human rights monitoring work with the organisation EAPPI.

Most of all however I tried to focus on stories of empowerment. How the Mayor of Jayyus would resolutely carry on working for the community despite having his house raided and his son arrested and attacked. I talked of how Israeli peace activists would come and work with Palestinians breaking down divides between the two communities.

When I finished my talk I was up-lifted to be met by a wave of enthusiastic questions. One member of audience told me of his recent trip to the Holy Land and visiting Hebron (and being shown round by an EAPPI colleague). Time and tme again, the question was asked, what can we do?

It was great to meet ordinary people living in Gloucestershire that felt inspired and empowered to work on the behalf of others. The congregation at St Andrews showed so much empathy towards strangers, and significantly also a willingness to act. It has left me inspired; I hope that I will be met with this sort of audience throughout my talks.