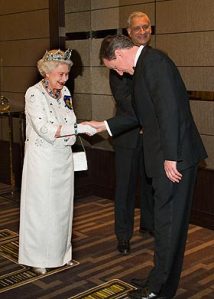 The BBC has apologised for telling the nation that the Queen – Elizabeth Windsor – raised with the government ‘her concerns’ about why Abu Hamza al-Masri had not,at that point, been arrested. The revelation came on the Today programme on BBC Radio 4 and reveals details of a private conversation the BBC security correspondent had with the Queen.

The BBC has apologised for leaking details of this private conversation.

Should they have apologised though? With such a clear public interest in this story, are the BBC not entitled to release details?

The BBC has provided evidence that Elizabeth Windsor, the Sovereign of the United Kingdom has potentially over stepped the mark as a ‘Constitutional Monarch‘. She has meddled in politics.

The ‘rules’ are very clear, as the Head of State in a Constitutional Monarchy, The Queen (Elizabeth Windsor) has to remain strictly neutral with respect to all political matters.

Whether or not she has officially overstepped this role depends on whether she, on this occasion, failed to remain ‘neutral’. Regardless, there is a compelling argument to suggest that she has violated the spirit of a constitutional democracy, even if not the letter.

The problem does not stop there though. Due to overly secretive nature of royal involvement within our politics we have no idea when she has, or has not, ‘expressed her opinion’. New Labour, ironically after probable royal lobbying, made sure the royal family was exempt from the Freedom of Information Act.

Equally disturbing is the role of the BBC in this whole affair. Why do they refuse to make public any other occasions they know of royal intervention in party politics? As Republic’s spokesperson Graham Smith said, “The decision to disclose this one conversation while keeping all else secret smacks of a deliberate PR stunt to put the Queen on the right side of public opinion. Yet the BBC have acted as the official mouthpiece of the palace without making any attempt to scrutinise what has been said.” Are the BBC representing public interest or royal interest? They are not always the same thing.

The monarchy is not irreplaceable.

If we are concerned with how much Elizabeth interferes, just wait until she’s gone and we have her son as Head of State. Charles’ meddling in everything from education to agricultural, environmental policy, architectural commissions, the response to foot and mouth disease and the banning of fox hunting is notorious. I am not sure he even knows what a constitutional monarchy is.

For as long as the UK remains a constitutional monarchy, we need to ensure it is just that. Law making has to be left up to our elected politicians and law enforcement left up to our judiciary. These are the foundations of a functioning democracy.