UKIP, “the laziest party in Europe” – didn’t we already know this though? 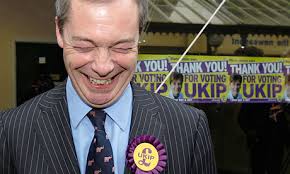 In a rare example of accountability, the Mirror has today branded UKIP the ‘laziest party in Europe’.

The story highlights the far-right party’s voting record, the worse of any political party in Europe. UKIP’s leader, Nigel Farage it reports, has the 5th to worst voting record out of all 752 Members of the European Parliament.

Two of the politicians that fared worse than Farage were his UKIP colleagues Godfrey Bloom and UKIP’s deputy leader Paul Nuttall. UKIP MEPs missed approximately a third of all votes they were expected to attend.

Quite rightly, Conservative MEP leader Richard Ashworth condemned this voting record saying, “UKIP bank the salary, pocket the expenses, but don’t turn up to do the work. They let their country down.”

The problem though rests in the fact that this article represents an exception to the rule. It represents a rare example of holding our elected representatives in Brussels to account.

The only reason this story has appeared in our national press now, is because of the impact UKIP is currently enjoying on our national UK politics.

Indeed, the almost exact same story was ignored by our press back in 2010 when Labour MEP Mary Honeyball blogged about UKIP’s voting record.

This situation though, of what is happening in Brussels being ignored by the majority of the British media, is nothing new. Let me give you an example.

In 2011 the then Tory (now UKIP) MEP, Roger Helmer, tweeted overtly homophobic comments (and indeed dismissed the whole notion of homophobia as, “a propaganda device designed to denigrate and stigmatise those holding conventional opinions”). These outrageous comments were picked up, but only by online blogs such as Liberal Conspiracy*.

Take though the recent comments by Tory MP David Davies (he commented that parents “wouldn’t want gay children”). On this occasion, The Daily Mail, The Telegraph, The Guardian, The BBC and Mirror all picked up on these comments.

One comment made by a MP, the other by a MEP.

In the last few years Tory MEPs have voted against opposition to the death penalty, against basic measures to combat climate change and against women’s rights. Where is the public and media outrage?

UKIP embarrassing Britain in Brussels is nothing new, but because of their success in the recent elections, our papers now deem it newsworthy!

*This comment in no way means to belittle online blogs such as Liberal Conspiracy which holds a readership comparable to much of the mainstream media. But the comment aims to highlight the different editorial standards blogs and traditional papers hold.

2 responses to “UKIP, “the laziest party in Europe” – didn’t we already know this though?”