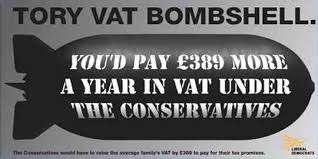 For readers living outside of the UK I need to start this blog with an explanation. Winding up well meaning left of centre Lib Dems has become something of national sport since they went into coalition with the Conservatives.

Normally I try to resist this. In fact I’m often the one listing Lib Dem achievements in government as a backlash to those crass lefties who have no real concept of how Westminster politics work. I honestly believe we are better off with the Lib Dems in government but I am also, like so many on the left, pissed off with so much regressive rubbish they have let happen on their watch.

I say I normally resist taking part in this new national sport because the other day a wonderfully nice Lib Dem friend tweeted in response to me posting a link to the Lib Dem 2010 manifesto:

@steve4319 I lament at the number of people who say the LDs broke lots of promises and, having named fees, can't name any significant others

I just couldn’t resist whipping off a list off the top of my head:

@Sam_Lawes Trident, electoral reform, benefits reform, drugs, asylum practices (the list could go on)…the qu is tho, how many their fault?

In this post, he suggests none of my suggestions constituted a broken promise. As such I thought I would use a few words to explain why, for all pretense and purposes, they are. I am sure more well informed readers can add to my following reasoning (a particular appeal to my lawyer friend Tom who I mention later on!).

Trident. Sam makes the point that Trident has not been replaced. True…sort of. The decision on actually replacing Trident has heroically been pushed back to 2016, although the “Initial Gate” phase, consisting of £3bn in procurement, has already been approved. I think this is what Sam refers to as “bit of money” being spent. That, to clarify, is £3bn spent (without a value for money test like the sorts the Lib Dems have always said is needed).

Ever heard the phrase, ‘a project is too expensive to fail’?

Electoral reform. Sam lists the things the Lib Dems have done, and perhaps more importantly, things Lib Dems have tried and failed to do (the longer of the two lists). On electoral reform in general the Lib Dems can hold their heads up high – they have heroically lost their fight for proportional representation – but this wasn’t through lack of trying.

Apart from that is, with Lords Reform. With this they just sort of gave up after their coalition partners reiterated that they didn’t really like that idea. Not quite so heroic.

So, they certainly haven’t delivered on many of their promises – but this is not quite the same as breaking them and it isn’t through a lack of trying. But on Lords Reform, I would argue they have as good as given up on a promise.

Benefits Reform. When I wrote this one I was thinking of their promise to set the minimum wage at the same level for every adult over the age of 16 (at the moment a 16 year old only has a legal right to be paid 3.72 – compared to a 21 year old who can claim 6.31). This has not happened and I haven’t even really heard it being discussed. A small promise broken.

Sam, in his post, uses the income tax threshold rise as an example of a promise kept. True, but not exactly benefits. If we are talking tax, we might want to mention the broken promise to not raise VAT (the “Tory tax bombshell”).

Drugs Reform. Again a non-starter for a Lib Dem policy. You see, the Lib Dems believe in all sort of crazy hippy ideas like science and evidence based policy making. The Conservatives don’t as they worry it might offend middle-Britain. The result? A non-starter. No reform of drugs policy to refocus on treatment rather than punishment.  A promise ignored.

Asylum policy. I mainly put this in because I had just come back from a holiday with a refugee lawyer who specialises in dealing with undocumented children.  I walked with him for hours as he explained to me how generally shit our system is and I am sorry to say, how children are still being detained. He did say the move to end child detention was a good thing and that things have got a bit better. But let’s not kid ourselves. Innocent children are still being held in horrific conditions whilst being put through a brutal and inhuman system.

A move with good intentions by the Lib Dems but ultimately, until the system gets a proper shake up, this remains a promise broken!

Then there was the promise of ‘End deportations of refugees to countries where they face persecution, imprisonment, torture or execution’. Well, that err…hasn’t happened.

The list could go on. Sorry Sam, but it could – think, police (less not more on the street), more midwives, banning banker bonuses over 2,500 pounds….and this isn’t just a turn of phrase, the list really could on!

Now of course, promises have been broken by political parties of all colour. I guess the Lib Dems deserve just a little extra kicking because they had the audacity to produce this video.

5 responses to “List of Lib Dem broken (or ignored) promises”