Seasonal ho-ho-hope for The Green Party

A new poll from YouGov shows that the majority of Brits think Father Christmas would vote for either Labour or The Green Party. 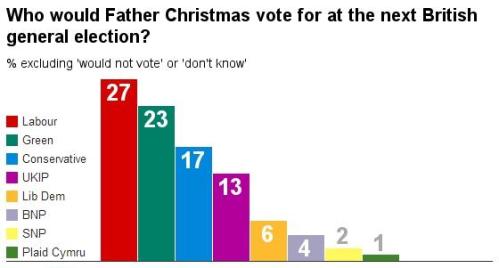 What is quite interesting about this poll however is that support tends to fall along party lines…apart for The Green Party who seem to pick up support from voters across the political spectrum.

Interestingly, 42% of those who voted Lib Dem in 2010 thought that Father Christmas would be a Green voter while just 10% of them thought he would vote Lib Dem.

Some ho-ho-hope for The Green Party and another worrying sign for the Lib Dems.

You can see the full results here.