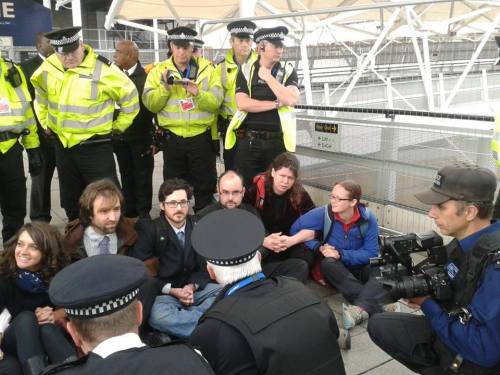 In September 2013 someone who I deeply respect took the decision to create a blockade to stop arms dealers entering Defence Security and Equipment International (DSEi) 2013.

Symon Hill is a Christian and an activist. He also represents the better thought out wing of these two categories. He is someone that I have a lot of respect for.

In September when he joined a human non-violent blockade he was arrested (alongside James Clayton, Chloe Skinner, Chris Wood and Daniel Woodhouse) under the Criminal Justice and Public Order Act 1994.

They all pleaded not guilty to the charges.

The date of their trial has now been announced as the 3rd and 4th February at Stratford Magistrates Court. Those who want to are encouraged to join a vigil outside the court at 10:00am each day.

It would be great if enough people showed up so the story was subverted from ‘Christian activists on trial for public disorder’ to ‘Hundreds gather outside court in solidarity with Christian peace activists’.

Sadly I am a few thousand miles away in a different continent so I can’t make it. That is why I would love you, yes you, to head down there and offer your support to both a friend and a principle on my behalf.