Well over two hundred faces looked on. Each face, for different reasons, stared intently out at the flowing river. From the bank the competing kayakers stood with tops off drying themselves in the afternoon sun eyeing up their opponents bobbing in the water as they waited to take to the rapids.

Spread out over the rocks spectators sunned themselves with cold beers in hand as excited children pushed passed unsuspecting viewers to get perilously close the water’s edge to ensure the best view of the unfolding spectacle.

Sat on the banks of the River Nile, this incongruous group was there to watch the freestyle competition on day three of the white-water kayaking festival, ‘Nile River Festival’.

No one left disappointed.

The festival, now grown into a four day event that attracts competitors from across the world including Russia, the UK and of course the home grown talent of Uganda, is an annual highlight for tourists and extreme sports junkies alike.

The spectators stood on outcrops of rocks on the banks in the bright afternoon sun watching on as competitors such as Sam Ward, team GB coach and co-owner of Kayak the Nile, took to the ‘Nile Special’ rapid to compete against some of the best kayakers from around the world. 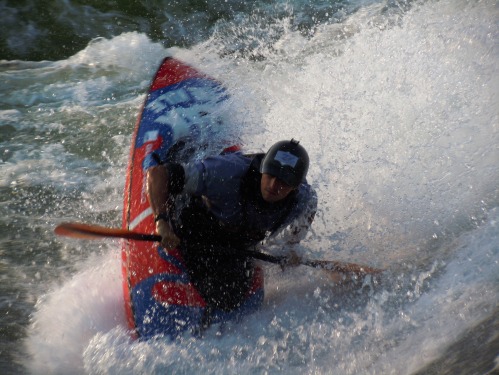 As the afternoon progressed, the crates of empty beer bottles stacked behind the bar started to grow as the sun slipped behind the opposite bank of the river. The kayakers who had not progressed passed the earlier heats now encapsulated the spirit and ethos of the festival by staying, supporting and joking with the remaining competitors.

Out on the river the final four competitors were doing their all to raise a cheer from the crowd and to impress the on looking judges. If the faces of some of the local children who sat huddled together completely engrossed at the competitors acrobatics were to go by then all four kayakers deserved to win.

Despite the Ugandans getting the inevitable loud cheers for every trick completed it was the Brit, Sam Ward, who, after a long afternoon’s performance, came in victorious in the men’s competition.

As the event came to a close streams of children squeezed past the legs of the flip-flop laden spectators who now scrambled up the dry banks of the river – a task made no easier, but certainly more funny, by the afternoons beer.

My advice…keep an eye out for the Nile River Festival 2015. But if you can’t wait until then, why not drop Sam at Kayak the Nile an email and give it a go yourself?