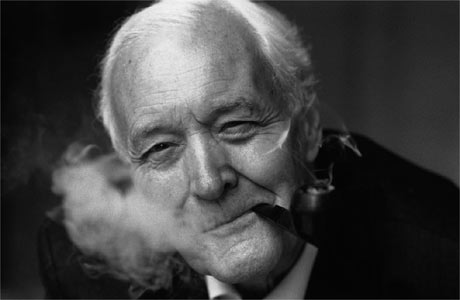 This morning I have awoken to the news that Tony Benn, the long-standing Labour politician, has died aged 88.

Tony Benn was, and remains, an inspiration for me in many ways. His commitment to radical grass-roots politics inspired much of what I believe today. It is this belief, that was instilled into me by Tony Benn, that still pumps through me.

His turn of phrase, his wit, and his charisma remain unmatched in politics.

His words will live on and will remain as a testimony to his life.

I will, the Labour movement will, and many more from across the political spectrum will dearly miss him.

May he rest in peace.

Tony Benn is the only person I have allowed to smoke a pipe in my church. RIP. Great man.

Sad to hear Tony Benn has died. Passionate & powerful speaker, lively mind, generous friend who gave so much time to so many people.

Shakespeare wrote "no legacy is so rich as honesty". Tony Benn left an entire country wealthier with truth. No sadness here. Just gratitude.

Tony Benn said what he meant and meant what he was said. An inspiration, a ceaseless fighter for workers' rights, social justice and peace

Tony Benn was a magnificent writer, speaker and campaigner. There was never a dull moment listening to him, even if you disagreed with him.

Not a fan of death tweets, but Tony Benn never gave himself airs and graces. Genuinely liked and was kind to people. That's real radicalism

"There are some Christians in the churches, just as there are some socialists in the Labour Party." – Tony Benn, 1995 #TonyBenn

The thing about Tony Benn is he believed so hard in power of politics to change things, & in importance of ideas, he made you believe too.

Politics, & life, seem so much poorer this morning. Tony Benn will be hugely missed for his courage, clarity, conviction – and kindness

Tony Benn was the greatest orator I have ever seen and many of his ideas re accountability and democracy are at least as potent now.

Britain is poorer without Tony Benn: democrat, patriot, heir to our indigenous radical tradition. How small his successors seem by contrast.

Bless you Tony Benn, so inspiring, principled, eccentric and rebellious, full of so much tea and pipe-smoke, you were the perfect Englishman

RIP Tony Benn. That rare breed of politician, who never clambered aboard a bandwagon in his life.

Sad that Tony Benn has passed away. A friend and hero whose solidarity, humour and integrity will be sorely missed 😦 pic.twitter.com/lQjeeUvUFO

Tony Benn had a fearless eloquence. With the confidence of an insider and cunning of a maverick his words and deeds so inspired#RIPTonyBenn

Ah Tony B! Thrilled, entertained, maddened, infuriated, amazed and inspired me at various times. And finally makes me weep.

Goodbye dear Tony Benn. You never stopped fighting for the people at the bottom of the heap, and you will not be forgotten.

Saddened by the loss of Tony Benn. He was a great campaigner, writer and orator who possessed an amazing memory #RIPTonyBenn

Rest in peace Tony Benn. Turned his back on privilege to try to make Britain more equal for all of its people. A great man.

Devastated that our friend for peace, humanity and democracy has passed. Worked with and been inspired by Tony for over 40 years. RIP

Tony Benn disproved the old cliche that you become more right wing with age. He remains an inspiration pic.twitter.com/NC8YeMl6cx