The Green Party has a list of progressive policies that have been shown to be the most popular with the electorate. Despite this they have consistently failed to perform well elections.

Here are 3 simple things The Green Party could do to increase their chance of success in the up-coming May 2014 European elections:

1) Talk about issues that important to the electorate

This doesn’t mean selling out on core principles of social justice and environmentalism but simply relating them to ordinary people’s concerns and hopes.

At the top of this list (at the moment at least) has to be the economy but issues around immigration, unemployment and the NHS should all be regular features of their messaging.

Note: The environment does not appear in the top 10.

As I have argued elsewhere, UKIP have been soaring in the recent polls exactly because they have been able to install a general feeling amongst the electorate (despite having next to no coherent policies) about ‘standing up for Britain’.

The Green Party stands in complete contrast to UKIP in this sense – great policies but no one really knows what they stand for.

Over the coming couple of months then I hope to hear Greens talking, not about policies such ‘The Financial Transaction Tax’ or even the ‘Robin Hood Tax’, but instead about ‘principles’ such as ‘standing up for a fairer economy that puts people before big business.

The Green Party has traditionally held quite a complex position on the EU. They opposed the UK joining the euro for example but support membership of the EU. They want an in/out referendum but are broadly an internationalist party.

In this election though The Green Party need to simplify their message to just ‘Yes to Europe, Yes to a referendum’. (this is one yes less than their current messaging). Why?

Well, for the first time in a long-time it looks like those who want to stay in the EU roughly match those who want to leave. The only difference is electorally if you pitch for the broadly pro-EU voters you only have the Lib Dems to compete against (opposed to the much better branded ‘No’ to EU UKIP).

There is a reason why the Lib Dems are branding themselves as the party of IN and that is because there are a lot of uncontested voters who strongly want the UK to stay part of the EU. 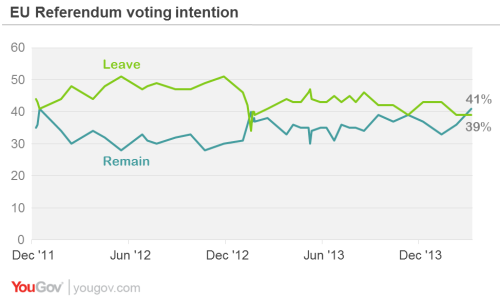 Of course none of this replaces the basics in campaigning, the building up local parties, delivering leaflets etc etc. All it does is offer a few tips for what direction The Green Party need to be moving in.

Tagged as EU, EU referendum polls, how to win an election, In/OUT referendum, May elections, The Green Party