Are The Green Party on course to beat the Lib Dems in May’s elections? Part 2

I wrote before about the Green Party’s chances of beating the Lib Dems (in terms of vote share) in the up-coming euro elections and found little polling evidence to back up the Green’s claim that they will.

It seems only fair then to point out that today a new poll has been released (YouGov Sunday Times voting intention) that puts The Green Party ahead of the Lib Dems. 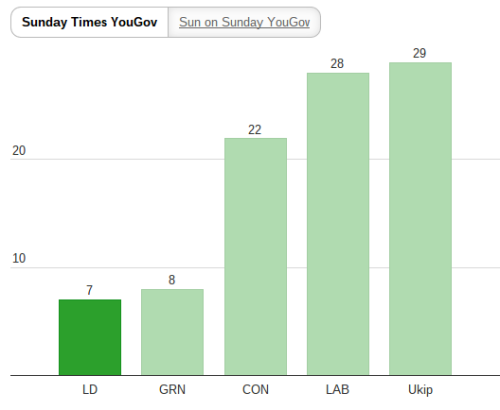 As far as I am aware this is the first poll to have these headline figures making it worthy of observation for Mike Smithson over at Political Betting.

Either way, as I argued before, The Green Party are on course for a good showing at the European Elections and the Lib Dems are simply trying to avoid disaster!

One response to “Are The Green Party on course to beat the Lib Dems in May’s elections? Part 2”