Are The Green Party on course to beat the Lib Dems in May’s elections? Part 3

That’s right – I am still not bored of writing about whether or not The Green Party will beat the Lib Dems in May’s elections!

On the 28th April I wrote an article essentially saying that The Green Party was on course to have a good night at the European Elections and that Lib Dems were going to get a kicking but, significantly, there was little polling to support The Green Party’s claim that they would beat the Lib Dems nationally.

I then followed this up with an article on 4th May when, for the first time, a poll was published that showed The Green Party ahead of the Liberal Democrats.

Any balanced commentator by this point would conclude that the figures were within a ‘margin of error’ and that it was next to impossible to call who will come out on top (between the Greens and Lib Dems).

This, in my mind, is still the only conclusion to reach (combined with the fact that Lib Dems will drop seats and Greens will gain).

But there is something to suggest that The Green Party might just slip past the Lib Dems. This is the trend of polls. While the Lib Dems have the numbers in their favour (more polls have shown them beating Greens than vice-versa) there is a clear recent trend of Greens climbing in the polls as the elections get closer while the Lib Dems seem to be dropping. 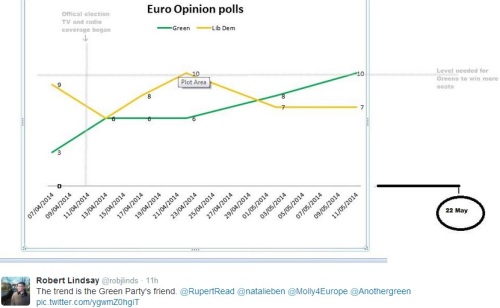 Interestingly, the same ICM/Guardian poll that puts The Green Party on 10% and Lib Dems on 7% is also the second in as many days that have put the Conservatives ahead of Labour (the other being this from Lord Ashcroft).

If you can conclude one thing from these polls for May’s elections it is this: voting under a PR system there is everything to play for regardless of the colour of your rosette.