The NHS and the blaming of rape victims

This poster was produced in 2006 and serves as one of many examples of institutionalized forms of ‘victim blaming’. 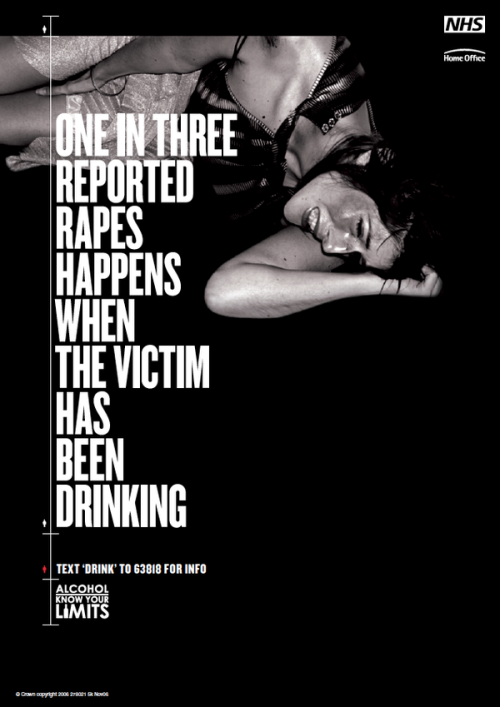 I was slightly horrified to see this poster re-circulating on social media this morning. It is yet another example of ‘victim blaming’ – the suggestion that a victim of rape was somehow at fault because of her behaviour.

This poster becomes that bit more shocking when you spot that it is produced, published and distributed by our own government.

‘Victim blaming’ is one of those myths that I spend so much of my time trying to counter. Simply, a rape is never the victims fault – the blame always ultimately rests with those who put their penis inside someone without that other persons consent.

Or, in the words of the NHS (in a separate campaign to the ‘Know your limits’ campaign):

“If you have been sexually assaulted, remember that it wasn’t your fault. It doesn’t matter what you were wearing, where you were or whether you had been drinking. A sexual assault is always the fault of the perpetrator.”

If the NHS did want to draw some connections between alcohol consumption and sexual assault though without slipping down this dangerous road of victim blaming, they could have made the exact same poster with the words:

“approximately one-half of all sexual assaults are committed by men who have been drinking alcohol.”

“Depending on the sample studied and the measures used, the estimates for alcohol use among perpetrators have ranged from 34 to 74 percent”.

This issue is a serious one that involves facing up to taboos as well as a very well funded drinks industry. Our safety, not just of girls, but all of us depends on tackling this. I don’t think it is hyperbole to say we are in midst of an unspoken epidemic.

Sadly this contribution from the NHS to the debate adds little but does reinforce an incredibly negative persistent perception that the victim is somehow to blame for being raped.

One response to “The NHS and the blaming of rape victims”