2 graphs that explain the dangers of climate change

The New Scientist yesterday published this graph under the headline ‘World on track for worst-case warming scenario’: 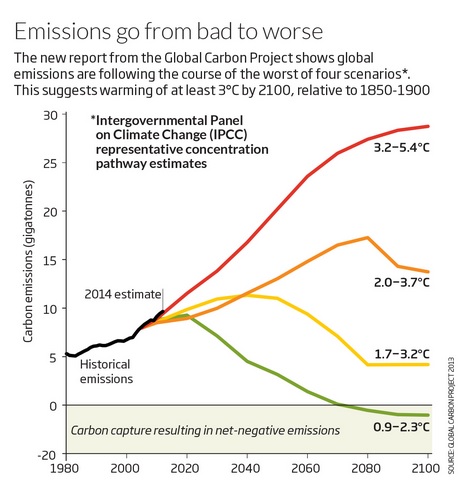 The graph shows how we, as human beings who are the primary drivers of global warming, are following the ‘worst case’ projections that the IPCC set out in their climate modelling. The article explains:

“Models predict how much the world will warm depending on how much we emit in future. Scientists typically look at four different possible futures, ranging from an uber-green society to a worst-case scenario, in which no action is taken to combat global warming. Le Quéré [the lead author] and her colleagues show how today’s emissions are near-perfectly in line with the worst-case scenario. This means that, according to scientists’ best estimates, the world will be as much as 5.4 °C warmer in 2100 than it was before the industrial revolution.”

The article goes onto talk about the ‘2 degree guard-rail’ – in other words the internationally agreed assumption that we need to keep global rise in temperature below that of 2 degrees from 1990 levels.

As I wrote back in 2009 however, this agreed guard rail is based on science that is now nearly 15 years out of date (based on work done pre-2001). As this graph from a 2009 University of Copenhagen report shows – the expected outcomes or ‘dangers’ of climate change will occur at a significantly lower temperature rise than was estimated back in 2001.

This report explains the significance of these findings in no uncertain terms:

“…a 2oC guardrail, which was thought in 2001 to have avoided serious risks for all five reasons for concern, is now inadequate to avoid serious risks to many unique and threatened ecosystems and to avoid a large increase in the risks associated with extreme weather events”

It goes onto conclude:

“…although a 2oC rise in temperature above pre-industrial remains the most commonly quoted guardrail for avoiding dangerous climate change, it nevertheless carries significant risks of deleterious impacts for society and the environment.”

In short, the first graph shows how we are currently on course for the worse-case projections that climate scientists have predicted. This will have disastrous consequences. The second graph then tells us that the targets that we are so woefully missing might well prove to be inadequate anyway and that the probability of these disastrous consequences start to go through the roof at approximately 2 degrees of warming.

With this in mind, riddle me this…why is this not on the front page of every newspaper, on the agenda of ‘Cobra emergency meeting’ in Downing Street, the number one priority for voters?

Is it as simple as a case of our collective head’s being buried in the sand? I don’t know, all I do know is that if we want change, we have to demand it from our decision makers.

In 2015 the UK has a general election – make sure you only lend your vote to someone who understands climate change and whose party take these risks seriously!