UKIP and Greens to influence the 2015 General Elections

Both UKIP and the Green Party are consistently polling at record highs. Hynd’s Blog takes a look at how this might impact the outcome of the 2015 General Election.

There is a broad feeling within the Westminster bubble that Labour will win the most seats at the next election. Opinion polls, with the exception of the aftermath of Miliband’s farcical conference speech when he forgot to mention the deficit (opps), show that Labour have consistently polled a few points ahead of the Tories.

Significantly though few expect them to secure enough seats to form a majority government. This means that a coalition is more than possible.

The latest uniform swing predictions put Labour short of an absolute majority by just one seat.

If this prediction comes true then Labour could comfortably (mathematically speaking) enter into coalition with one or a range of parties and rule with a majority government.

However, there is also a scenario where the Lib Dems (currently estimated to pick up 23 seats) fail to have enough support to help Labour secure a coalition with an overall majority.

With this in mind, the relative rise of both UKIP and the Greens and the demise of the Lib Dems takes on a whole new level of interest. No longer is it a given that the Lib Dems will secure enough seats to be able to go into coalition with Labour (or Conservatives) and form a majority government.

It is also worth looking at how in key marginal battle grounds the new found support for both UKIP and Greens might cause a split in the vote a cause an upset.

Those, including myself, who used to talk about the UKIP support just being an electoral blip, have surely enough evidence in front of them now to admit that they were wrong. Equally after a strong showing at May’s European elections and continued growth in support in opinion polls the Greens are increasingly securing their places as a major player in British politics – despite many commentators patronizing dismissal.

To illustrate the current consistent support both the Green Party and UKIP are enjoying I have looked back over the last 10 YouGov voting intention polls. This show that both UKIP and the Green Party are relatively consistent in their new highs within the polls (16-18 % and 5-7% respectively).

The next obvious question then is to ask where this new found support for these two relative outsiders is coming from.

Peter Kellner over at YouGov provides us with this useful infographic from surveys that had a collective sample is 26,724, of whom 1,314 said they would vote Green and 3,401 Ukip: 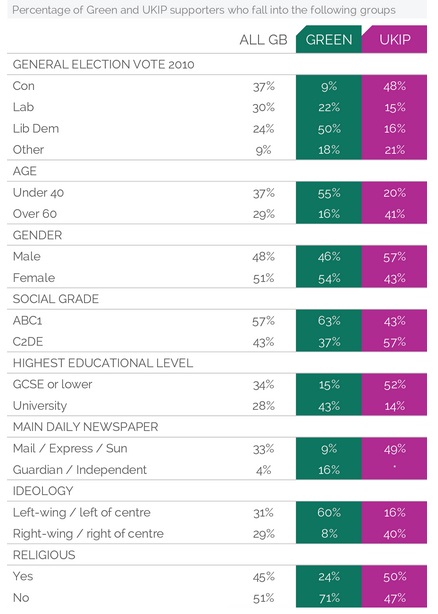 “In many ways the Greens and Ukip are mirror images of each other. Half of Ukip’s supporters are ex-Tory voters, while the Greens attracted half of their vote from the Lib Dems. Green voters are younger, more female, better-educated and more middle-class than the average – whereas Ukip voters are older, more male, more working class and far less likely to have a university degree. Ukip voters veer to the Right in ideology and choice of newspaper, while Greens veer to Left.”

UKIP, although picking up working class Labour voters, are overwhelmingly picking up former Tory voters. The Greens on the other-hand are picking up a lot of former Lib Dem voters.

If the Greens maintain this level and demographically specific support we can expect to see:

If UKIP maintain this level and demographically specific support we can expect to see:

In addition there is also a small chance, that UKIP (and even less likely Greens and nationalists) will secure enough MPs to become the minority partner in a coalition themselves – unlikely though.

With all this said and done we are left with more questions than answers: Is this the end of two party politics in the UK? Is our electoral system up to the job with the potential demise of two party politics? Will the Lib Dems enter back into coalition? Would Greens look to join a progressive alliance to form a government? Will Nigel Farage become the next DPM?

So much of this that seemed like an impossibility 4 years ago suddenly seems dramatically possible! When all the talk is of voter apathy it strikes me that there never has been a more exciting time to be involved in politics as the status quo is ripped wide open.