70 years of mountaineering in Uganda 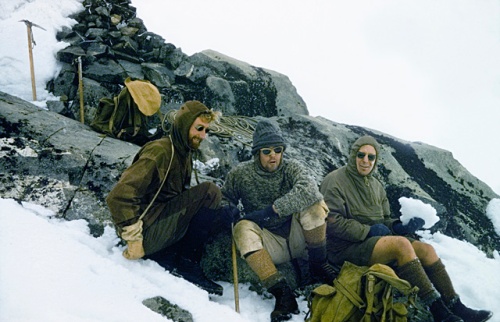 As the late afternoon mist draws down the valley the spectacular peaks of the Rwenzori mountain range are left tantalising exposed, reaching high up into the bright warm sky. The image of snow packed glaciers glistening on rocky mountain tops so close to the equator is one of the many wonders of mountaineering in Uganda and is cherished by those lucky enough to witness it.

Standing atop these majestic snow covered peaks is an experience that only a few have managed and perhaps, due to melting glaciers, only a few more will have the chance to see. Many perceive these peaks as too cold, dangerous or difficult to reach, but since its inception in 1945 the Mountain Club of Uganda (MCU) has been accessing and documenting the foothills and the peaks of this magnificent mountain range.

Soon to celebrate its 70th birthday, the MCU has undertaken renewed efforts to expand the Club and to fulfil its core mission: to encourage everyone in Uganda to enjoy, explore and celebrate the outstanding natural beauty that Uganda has been blessed with. This inevitably includes the mountaineering jewel – the range of the Rwenzori Mountains, but goes beyond this to cover all areas of the country.

Charlie Langan, the current President of MCU, talks keenly of the diversity of mountaineering in Uganda, saying, “Although the Rwenzoris provide an impressive challenge for anyone, Uganda has so much more to offer. From the hills of Agoro in the north, to the spectacular peaks of the Virungas in the south west, from the crater lakes of Fort Portal in the west to the peaks of Kadam and Napak in the East, Uganda has something for any level of fitness, enthusiasm and experience. At MCU we are here to help people get out and enjoy the outdoors in this incredible country.”

The MCU was first founded in the Geography Room in another of Uganda’s long standing institutions, Makerere University in Kampala.  The Club was originally founded as the Uganda section of the East African Mountain Club by Rene Bere along with students and lecturers but soon developed into the ‘Mountain Club of Uganda’ – a name that it still proudly bears today.

Indeed, it was in these early years that the MCU laid down the foundations for mountaineering in the country. Deo Lubega, the Club’s Patron who has been active in MCU for over 25 years, reminds newer Club members that it was the MCU who between 1949 and 1958 built a circuit of six huts on the Rwenzori Mountains as well as a hut on Mount Elgon and on Mount Muhavura. At the time the Club was dominated by expatriates but very early on decided to offer training for interested Bakonjo porters to offer formal porterage services on the Rwenzoris as an alternative source of income.

As such in 1960 Timothy Bazarrabusa became the first Ugandan to climb Margherita peak, 5,109m above sea level – the highest point in the Rwenzori range and Uganda. Bazarabusa went on to become the President of MCU and later its Patron and a key advocate for mountaineering in Uganda.

In 1972 MCU Presidents Henry Osmaston and David Pasteur published the “Guide to the Rwenzori’s”- a definitive guide to the range and its history and peoples. Along with Andrew Stuart and James Lang-Brown, these were some of the key figures in the history of mountaineering in Uganda who have documented and explored the mountain areas of Uganda.

Since that time the Club has held a commendable but somewhat discontinuous existence, due to political instability and restricted access to the mountains due to civil unrest. Today, as the MCU turns 70 it continues to build on its proud history and to open its doors to members old and new.

Langan, the current MCU President, commented, “In the last few years the Club has grown from a handful of people interested in mountaineering to a vibrant and diverse community of people eager to enjoy the outdoors. We have spread beyond simply walking and climbing and now regularly kayak on the river Nile, mountain bike through forests and villages and of course, meet up regularly to socialise with like minded friends.”

This ethos of encouraging others to enjoy the outdoors has also driven the Club to try and document the potential for climbing, walking and other activities in Uganda. Just as the Club proudly published a ‘Guide to Rock Climbing’ in 1963, so the Club is today editing the final draft of an updated guide to encourage others with a sense of adventure to leave the comfort of Kampala to head out and explore the extraordinary outdoor environment that Uganda has to offer.

2 responses to “70 years of mountaineering in Uganda”