The Ipsos MORI poll due to be published in today’s Evening Standard has caused ripples today as it shows support for Labour at a record low since 2010.

However behind the headlines there is another interesting figure to pull out of this latest polling – the Green Party are on a dramatic high securing 9% of the voting intention of all adults over the age of 18: 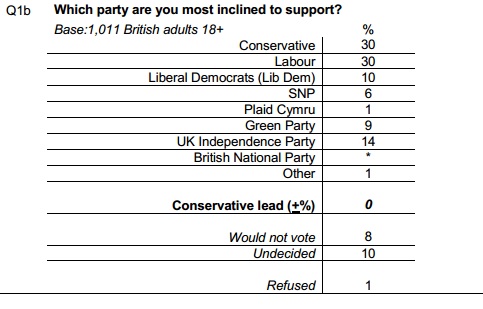 Despite this quite momentous rise in the polls the Ipsos MORI write up of the results does not mention the Green Party once.

Frustratingly, it is from this text that lazy journalists will copy and paste their articles not bothering to look at the data tables behind the polls (something which I have to do if I want to find out how the Greens are doing).

If they did, I am sure that they would use the headline finding of this poll (Labour being on a long-term low) but equally is it not noteworthy that the Greens are reaching such competitive heights?

Let’s see if any journalists pick up on this…