The Independent has published three charts that they claimed showed why British politics is so interesting at the moment (how very Buzzfeed).

One of the charts was this one showing the political party memberships: 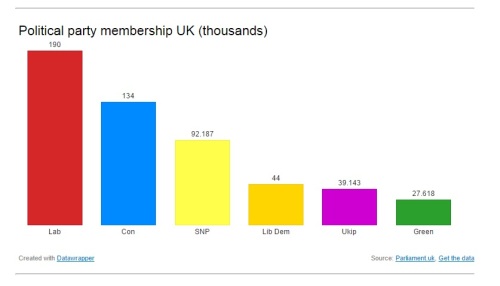 It is noteworthy that the SNP, a party attracting most of its support from Scotland – with a population of less than 6 million are towering above the Lib Dems and UKIP combined! Impressive.

This makes the Green Party membership comparable to that of UKIP. The Green’s membership however is growing about three times as fast in 2014 than UKIP suggesting that these positions will soon be reversed.

Today, Derek Wall from the Green Party tweeted this graph showing the growth in Green Party Membership from 2002 – 2014. 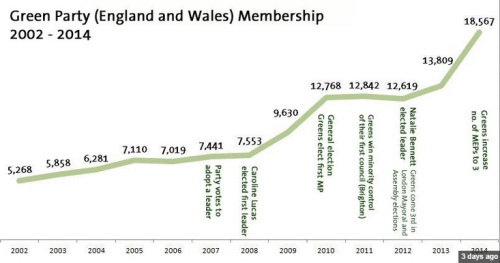 Two interesting points to draw out from the graph:

In contrast when we look at membership figures (source: House of Commons briefing Sept 2014) of the three largest political parties in the UK we can see the exact opposite occurring: 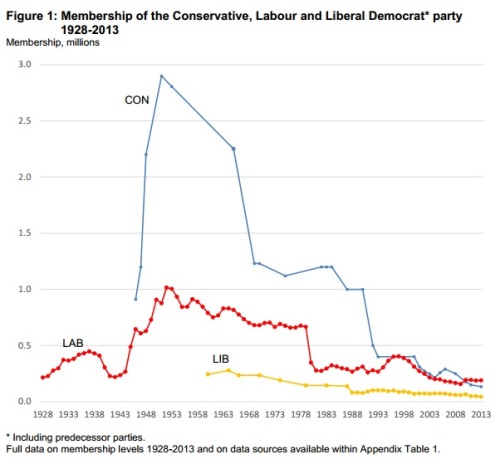 For the sake of comparison, if we look at the Conservatives compared to the Greens we can see that the Tory membership fell by more than half between 2000 and 2013 while the Green Party grew by three fold.

It is worth highlighting though that other smaller parties are also seeing a growth (the BNP serving as the exception).

Perhaps what is most interesting however is to look at the percentage increase or decrease over the last 10 years to examine where the momentum is in British politics:

This one crass measure doesn’t tell you much but it does suggest that both UKIP and Greens are currently riding high.

The pertinent question though is will this trend continue and will all these small parties become bigger players in British politics or will we see some of them drop off like we did the BNP?