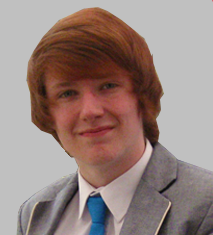 William Coles, blogger for PoliticsStudent and " a bound Thatcherite and a Eurosceptic"

William Coles who writes for Politics Students has written a piece entitled “The EU: It’s getting ridiculous now” where he outlines some of the most crass myths about EU membership. Here I will offer a quick response to some of his points.

He states, “A constantly repeated fact about Britain’s membership of the EU is that the cost totals at £50,000,000 per day…why spend it on our membership of this union? That public money should be doing better things such as going towards schools, the NHS and local authority services”

William Coles goes onto say, “75% of British laws are made outside of the UK in the European ‘Parliament’. To add insult to this injury, the British voice in Europe is worth around 11% of the total number of MEPs. This means that many EU policies affect ordinary people within Europe in the form of EU regulations that attempt to impose a single standard across Europe”

I say that this is inaccurate. Our friends over at Liberal Conspiracy do a great job at illustrating that his (and UKIP’s) estimate of “75% of laws are made in Brussels” is a huge over estimate and that no one really knows the true figure.  The politically independent House of Commons library though puts the figure at 9.1%. Who would you trust, UKIP or the House of Commons library? For a reasonable argument on this figure – check out this blog. Equally, statements like “laws made in the European Parliament” smack of a lack of basic understanding of the European Union and the decision making process.

To finish his unconnected ramblings he throws in “When John Hirst (A man who bludgeoned his landlady to death with an axe) took the UK Government to court because he believed that prisoners should have the right to vote; his wish was granted”

This (as he acknowledges) has nothing to do with the EU and everything to with the Council of Europe. He offers no explanation (other than to support his tirade) of why this whole paragraph was included.

He finishes by saying, “The Prime Minister has said that we in Britain should try to change the EU rather than leave it; I say to him, how on earth can we do so with only 11% of the European voice“.

Once again he fails to acknowledge the UK Government’s role in the Council, Commission, EEAS etc… Anyone who honestly doesn’t think the UK is an influential actor within the EU clearly has not spent anytime engaging with any of the EU institutions.

Still interested? Here are my reflections on why the UK has such an antagonistic relationship with the EU.

Male sexual assault is a serious crime that is often “hidden” from the publics view for a number of complex sociological reasons.  For some this blog entry will be stating the blindingly obvious, for others it might be the first time they have thought about this issue.  For others however, I hope it will begin to break down some lingering myths around male sexual assault.

Male rape is not a new phenomenon, but it is only just beginning to be fully recognized by our legal system. It only became a specific legal offence in 1994.

Some people refuse to believe that male rape (or sexual assault) happens regularly enough for it to be considered as a serious policy issue.  This is far from the truth.  Although men are disproportionately the perpetrators of sexual offences, recorded crime shows that men are also victims of it.

There is an on-going myth that male sexual assault is somehow related to either the perpetrators or the victim’s sexuality.  Firstly, it should be noted that the majority of male sexual attacks are undertaken by heterosexual men on heterosexual men.  Secondly it should be noted that rape, in the act itself (whether it be on a women or a man) has been shown to be about control, power and dominance not about sex or sexuality.

Men are often considered to be in a better situation to “get over it” than women because they are more robust and do not risk pregnancy.  Rubbish, men have the same potential to feel shame, self-blame and guilt as women.  For some men, being sexually assaulted can lead to serious long-term consequences that should not be underestimated.  Whilst being assaulted some men experience erections and sometimes ejaculations.  This can lead to the victim questioning their sexuality; it can result in erection problems or an inability to ejaculate.  It can lad to the victim questioning whether they might have sub-consciously “wanted it”.  None of the physical reactions imply there was consent or even genuine sexual arousal.

It is often said that women do not assault men.  Rubbish again.  Although the majority of male sexual assault cases reported are men attacking men, women can, and do attack men.  Often men find it hard to report such a crime for the stigma attached to it.

People often think about male sexual assault in a stereotypical sense with it only occurring in prisons or Catholic churches. People find it harder to interpret the rugby initiations sessions, or the other “normal” activities as potential locations that can lead to male assault.  Male rape, like raping a woman is disproportionately likley to be undertaken by someone the victim knows.  As a man, you are very unlikely to be raped, but incredibly unlikely to be raped by a stranger.

Male rape remains an exceptionally large taboo.  The likelihood of a victim reporting an incident remains low.  The likelihood of the police taking the victim seriously and then undertaking a proper investigation that is not plagued by false assumptions and prejudices remains lower.  If someone confides in you remember it has taken a lot of courage for them to tell you. Do not assume that the victim “has to tell police” but hand power back to the victim by offering them help by simply asking what you can do.  You can always refer them to the specialist help centres set up to help people through such terrible incidents.