What is a ‘major political party’? Greens to overtake UKIP in membership size

It is expected that in the coming weeks the Green Party will become the fifth largest political party in the UK by overtaking UKIP in terms of membership.

According to new figures collected by Adam Ramsay at Open Democracy, the Green Party are now just a few hundred members short of UKIP and a few thousand short of the Liberal Democrats.

This latest twist in membership size will only add weight to those who are calling for the Green Party to be included in the TV leaders debates. What would constitute a ‘major party’ (what Ofcom deems them not to be) if it is not more members than UKIP, beating Lib Dems in some polls and getting more votes and MEPs than the Lib Dems in May’s European Elections?

Of course, the political elephant in this very Westminster room is the SNP that currently have roughly double the membership of the Lib Dems and are being tipped by some to wipe out Labour in Scotland.

Are the SNP not a ‘major party’ in UK politics?

Today, Derek Wall from the Green Party tweeted this graph showing the growth in Green Party Membership from 2002 – 2014.

Two interesting points to draw out from the graph:

In contrast when we look at membership figures (source: House of Commons briefing Sept 2014) of the three largest political parties in the UK we can see the exact opposite occurring:

For the sake of comparison, if we look at the Conservatives compared to the Greens we can see that the Tory membership fell by more than half between 2000 and 2013 while the Green Party grew by three fold.

It is worth highlighting though that other smaller parties are also seeing a growth (the BNP serving as the exception). 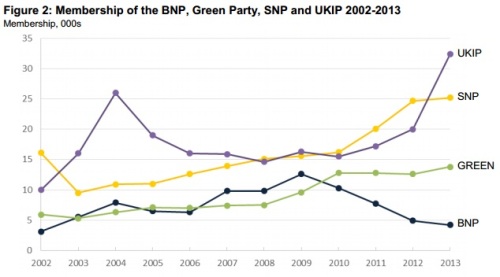 Perhaps what is most interesting however is to look at the percentage increase or decrease over the last 10 years to examine where the momentum is in British politics:

This one crass measure doesn’t tell you much but it does suggest that both UKIP and Greens are currently riding high.

The pertinent question though is will this trend continue and will all these small parties become bigger players in British politics or will we see some of them drop off like we did the BNP?

Latest figures: Green Party membership up while the ‘big’ three all see slumps… 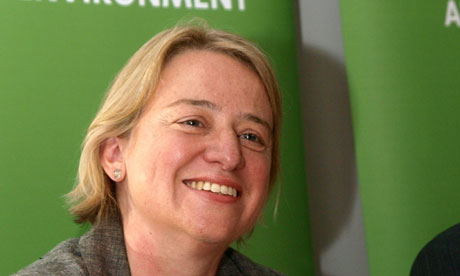 The Green Party sent out an interesting press release today stating that their membership had ‘grown by 23% in the first 5 months of 2014’.

Let’s keep this claim in perspective, it has grown from being small to not quite so small, but the fact that it has grown at all, let alone to some 17,000 people, is interesting for two reasons.

Firstly, it is well and truly bucking the trend of party membership that is being endured by the big three political parties.

Party political membership has been on the dramatic decline since the Second World War resulting in just 1% of the population now holding membership to a political party.

As the BBC rather dryly pointed out:

“There are more members of the Caravan Club, or the Royal Society for the Protection of Birds, than of all Britain’s political parties put together.”

Indeed, the Conservative Party membership is thought to have almost halved under Cameron (although figures are not official it is thought to be as low as 134,000 now!)

A House of Commons briefing paper put the Labour and Lib Dem membership on 193,000 and 49,000 respectively (although in reality the figure will be much lower by now).

So, for The Green Party to be able to claim to be ‘on course to break 20,000 members’ by the end of the year is a pretty impressive, especially  considering the general discontent with party political politics.

Secondly it is an important building block to the long-term success of the party. Although The Green Party had a reasonable local and European election last month, we know that voters can be fickle and that many of these will vote elsewhere come May 2015.

Members in contrast have shown a commitment (they have paid some of their hard earned cash to start with) to the party that should be longer lasting. Members provide a volunteer as well as economic base for the party to grow from. This in turn can help the party launch better (funded) election campaigns that will potentially lead to more elected representatives which eventually can  lead to their actual goal – more Green Party policies being introduced.

You can find out about joining the Green Party by clicking here.