Russia has blood on its hands – the plight of Syria 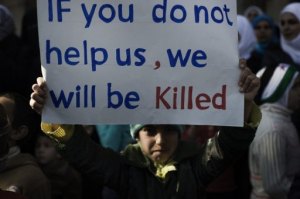 Months have passed between Russia’s crucial vetos at the UN security council that have effectively scuppered any chance of effective international sanctions. In this time, it is estimated that a further 2,600 have been killed in Syria.

Russia however has a significant vested interest in allowing the bloodshed to continue. It remains, despite the ongoing atrocities, Syria’s largest arms supplier. In recent weeks large shipments are reported to have arrived in the country. This is happening despite widespread reports of 10 months of a government campaign of killings, arbitrary detention, torture and enforced disappearances. Amnesty International and a UN Independent International Commission of Inquiry consider some of these events to amount to crimes against humanity. How, in light of this can Russia justify continued trade in arms with Syria?

Russia is illustrating why, in July 2012, implementing an effective arms treaty at the UN to eradicate these loophole is so important. The arms trade is morally based on a false assumption about the competence, legitimacy and morality of other nation states to use arms in line with international expectations (a notion that I would have trouble with any way). Syria and Russia are all to clearly illustrating that these assumptions do not play out into reality. They are also showing the devastating effect the arms trade can have on people’s lives.

Russia, through the continued irresponsible use of its veto, and its continued arms deals with Syria has got blood on its hand. We have seen only snippets of the atrocities that are taking place as the Syrian regime continues to deny free and unfettered access to international human rights monitors. History will tell us the extent of what is occurring, all we know for sure now is that Russia is allowing this bloodshed to continue.

Finally, it is worth noting, that the UK is not exempt from the dirty arms trade. Read more here.