The girl effect and the silent struggle

This is a guest article by Angelique Mulholland. A friend, women’s rights activist and contributor to the pixel project.

What do Jimmy Savile’s victims, Female Genital Mutilation sufferers and Malala Yousasfazai all have in common?

All were forced into silence.

Told like a joke, but not very funny right? All week on the Twittersphere people have been posting jokes about Jimmy Savile being an alleged pedophile.

Black humour which pushes the boundaries can be intelligent and funny. But really, so many of these jokes lack any cleverness or ingenuity – they are often banal and push the boundaries of insensitivity  more than anything else.

Let’s start with Saville and his alleged career of rape and child abuse. Let’s start with the protection the young vulnerable victims deserved, but never received. The question on most people’s lips: How did the bastard get away with it? The Independent’s headline on Friday seemed to sum it up – “Why did nobody stop Jimmy Savile?” How did so many apparently “decent folk” turn a blind eye to four decades of child abuse? Why weren’t these young girls believed and protected?

One ex-patient of the psychiatric hospital at Broadmoor recounted her experience of Savile and the conspiracy to the Channel 4 news. “We were the perfect victims. Nobody would have believed us…. People knew what he was doing. He was enabled. 9 times out of 10- people know what is going on.” The alleged victims were enmeshed in a wall of silence forced upon them by adults who were supposed to protect them. We will never have this proven in a court of law of course, but it seems Jimmy Savile got away with a sustained campaign of rape and child abuse because he was protected by a society that looked the other way and was too afraid to speak out. The kind of silence that protected Jimmy Savile is heavy, thick and all consuming.  It is powerful. And it makes otherwise decent folk, cowardly.

FGM and the Silent Scream

Onto another form of abuse against girls where inaction and fear of speaking out contributes to creating countless victims.

On Tuesday 9th October, I met with a group of schoolgirls in Bristol who have been campaigning to put an end to Female Genital Mutilation. They are supported by a project called Integrate Bristol and have won an award for creating their own film about FGM, Silent Scream.

I was interviewing them on behalf of The Pixel Project – a women’s human rights charity that I write for.

The Home Office estimates 24,000 girls are at risk of FGM here in the UK.

FGM has been illegal in the UK for 30 years, yet there has never been a single prosecution and it is largely ignored by both schools and the medical profession. Girls who are subjected to FGM are usually between the ages of 3-14 years old. This harmful practice involves young girls having the partial or total removal of their clitoris and labia often without anesthetic. The physical and psychological effects are devastating.

Despite the taboo, the girls have broken the silence and spoken out. Their message? They want people to break the silence, they want girls to have rights over their own bodies and they want the British government to act. The UK is far behind the rest of Europe in tackling FGM. In France – girls are protected. In Sweden- girls are protected. The FGM issue is mainstream. People talk about it. Perpetrators are held to account. All young children are examined by trusted healthcare professionals to make sure they are safe. Alternative rite ceremonies into womanhood are encouraged and supported. Kids learn about FGM in schools. In the UK? Inaction. The frustrating term “cultural sensitivities” is thrown around again and again and again – and hidden behind.

A comment by one of the girls, “David Cameron- grow a pair and do something.”

On the day I met with the girls in Bristol, 4,000 miles away in Pakistan, a young girl named Malaya Yousafzai was shot in the head at point blank range, on a bus, on her way home from school.

Her killers have said that if she recovers – they will hunt her down and attempt to kill her again. What crime has this 14 year old girl committed? It appears she had the audacity to demand another basic human right – the right to an education.

Her killers, the Pakistani Taliban, branded “pathological haters of women”  are renowned for their violence against women. Yet it seems the attempted murder has had the opposite effect to what they were anticipating. They wanted to silence Malala; but the outrage against the Taliban is palpable and the speaking out is loud and clear. 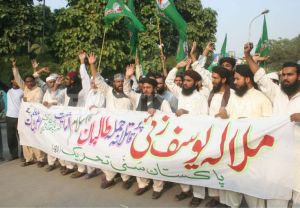 Girls in every country suffer from abuse and discrimination. And time and time again – their abusers are protected. Protected by taboo, silence and the fear of speaking out.

The first official “International Day of the Girl”  was held this Thursday 11th October. It is time we speak out for the girls who are subjected to FGM; we must speak out for the victims of Jimmy Saville and all victims of abuse. We need to speak out for Malala and girls around the world who are denied education and basic human rights – simply because they are girls. It’s time to galvanise and stand up for the rights of girls everywhere.

If each and every girl had control over her own body and access to education – her potential would be limitless.  I will leave you with this powerful video created by “The Girl Effect” which beautifully portrays just that – a world where every girl is protected and can therefore, thrive.