Was the EU’s next special representative for Afghanistan implicitly involved in covering up evidence of a secret detention facility? 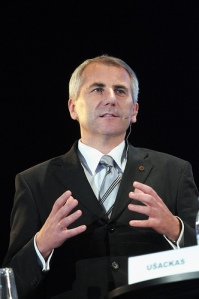 Vygaudas Ušackas, the new EU's next special representative for Afghanistan. Photo thanks to the Baltic development forum

Last month Dalia Grybauskaitė, Lithuania’s president, deemed there to be enough evidence to sack Vygaudas Ušackas, for alledgedly helping to cover up CIA secret detetion sites.  Ušackas has just been appointed as the European Union’s next special representative for Afghanistan and head of its delegation in Kabul.  With the growing influence of EU delegations with the implementation  of Lisbon, this appointment is a serious issue.  Why has the EU deemed this man fit to represent us, when one of its Member States has deemed him unfit for national government?

The BBC reported that “The CIA set up at least two secret detention centres in Lithuania after the 11 September 2001 terror attacks on the US”. It is unknown how many other “black spots” there were/are on European soil.  We do however; know that they were integral to the coalition’s widely illegal “war on terror”.  The centres were used as stop off points for the US’s practice of “extraordinary rendition” (this broadly means capturing someone in one country and then moving them to another country with no legal oversight – it also just happens to be that the country that they get moved to is often notorious for its use of torture).  A European Parliament report described “hundreds” such flights taking place.

The report by a parliamentary committee which highlighted Lithuania’s role in this sordid business also absolved the political elite of any responsibility stating “the president was unaware of exactly what the US intelligence service was doing”.  Yet despite this, he felt it necessary to fire Ušackas.  Ušackas had served as Lithuania’s ambassador to the EU, the United States and the United Kingdom before he became foreign minister in 2008.  This would not have been a decision taken lightly by the President.

This remains a baffling mystery to me.  Why, considering all that has been said, would the EU (you know the beacon of human rights), choose Ušackas to head the delegation in Kabul? Did Cathy Ashton (who he is accountable to) have a say in this – one assumes so! The EU needs to show the world that it holds its values in the highest priority.  It cannot do this, by putting people who are (accused of being) complicit in wide spread torture in charge of a delegation – especially such an important one as Afghanistan!