A not so peaceful protest

This article was posted on the Liberal Conspiracy blog.

I was stood in the middle of an escalating protest against the Israeli occupation in the village of Kafr Qaddum. The air was thick with tear gas, panic was spreading as people were running in all directions to escape. In this commotion another round of tear gas was fired directly at the crowd. I saw someone meters from me collapse. A man caught him as he was falling and lifted him onto his shoulders. As he tried to escape other men came to help carry him. After a few meters they laid him down on the ground and it became clear he had been shot in the neck by a tear gas canister. This was the second person of the day to suffer this fate. 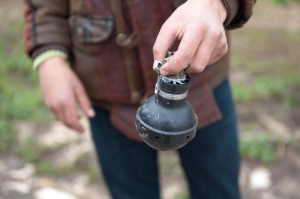 The former legal advisor for Judea and Samaria, Col. Sharon Afek of the Israeli Defence Force stated in April 2009 that, “direct firing [of tear-gas canisters] at persons is prohibited” and that, “very soon, an explicit and broad directive will be issued that will prohibit the firing of a tear-gas canister directly at a person.” When in July 2011 the Israeli human rights group B’tselem enquired to why they were still recording multiple incidents of tear gas canister being directly at crowds, Major Uri Sagi, of the office of the legal advisor for Judea and Samaria within the IDF stated that, “we have again clarified to the forces…the rules relating to firing of tear-gas canisters at persons, including the prohibition on directly firing a tear-gas canister at a person.”

In December 2011 the death of Mustafa Tamimi was caught on camera. He was killed by a tear gas canister fired by an IDF soldier from the back of a jeep just a few meters away. This incident caused international outcry. It was raised by Don Foster MP in a letter to the Foreign and Commonwealth Office and gained wide spread media coverage.

Despite this extensive history I today witnessed another two Palestinian men being hit by IDF fired gas canisters. Despite IDF regulations stating that tear gas must be fired at a 60 degree angle I witnessed them repeatedly firing directly at the crowd. Not only does this violate the IDFs own regulations regarding the use of tear gas, it also violates International Humanitarian Law by failing to distinguish between civilian and combatant.

This however was only one part of the story of what happened at the protest at Kafr Qaddum today. The IDF tactics varied between spraying chemically produced water with a awful smell (aka ‘skunk water’, firing tear gas (at the crowd) and even using dogs to capture protestors towards the front. I was told that this boy had his arm broken by the dog before being arrested. This was the first time I had seen dogs being used at protests – a potentially worrying development.

The protest is organised under the principle of non-violence. Regularly however stones are thrown at the IDF by boys from the village despite men trying to stop them. It was reported that last week that a soldier was hit in the face by one of these stones. This reality that the IDF faces however provides no justification for their continued breach of both IHL and their own regulations. We are collecting too many examples now of the IDF misusing tear gas. It is time for the IDF to start enforcing its own standards and to live up to its obligations under International Humanitarian Law

6 responses to “A not so peaceful protest”