As Gaza is bombed why do I keep looking for the odd good news story?

Reports have cumulated overnight suggesting that at least 25 Palestinians have been killed and 70 injured as Israel launched at least 160 strikes on the Gaza strip.

The death toll – primarily made up of civilians – has continued to rise as Israel amasses troops on the border readying for a potential ground invasion. Militants within Gaza continue to fire rockets into Israel with at least 140 launched on Tuesday alone but thankfully, so far, with no casualties.

This violence in the south and west of Israel and in the occupied Gaza strip has also resulted in an upsurge of violence in the Occupied West Bank with reports coming in of clashes between Palestinians and the Israeli Defence Force.

Amidst this escalating violence many, myself included, look on with a growing desperation for any positive development to hold onto. It is perhaps because of this that I have seen this photo, and the accompanying story, posted on my social media feeds almost as much as the photos of the devastation occurring in the Gaza strip. 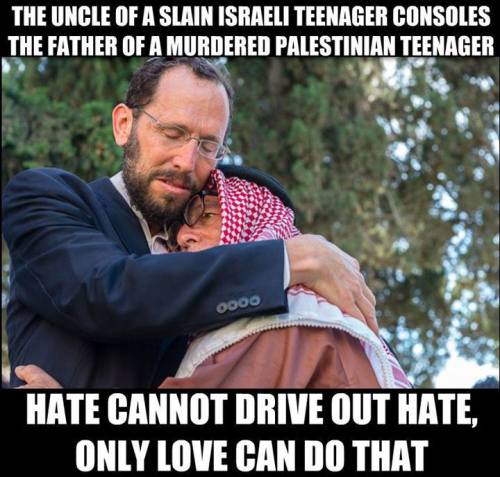 This story of mutual loss and grief holds resonance with so many because not only does it deal with death – something which connects us all – but also because it shows the shared humanity in a conflict that too often removes any sense of such commonality.

It is an important story that I hope more people read**.

This said, it also made me reflect how people (once again, myself included) use the Israel/Palestine conflict to project their own values. I want Israelis and Palestinians to focus on their shared humanity more than everything that divides them. I want this so much that perhaps at times I convince myself that this view is shared amongst Israelis and Palestinians more than it perhaps is.

How often do you hear commentators use a variation of the phrase ‘the vast majority just want peace’ with nothing to back this claim up?

Obviously in the broad sense of the word ‘peace’, I am sure this is true, but how many people want a realistic collection of the characteristics that are needed to establish peace? I am not sure to be honest. Probably not as many as I would like.

To counter this I grasp onto the minority who conform to my pre-existing perspective in hope that it validates my own views and my own vision for potential peace in the region. I suspect this is one compelling reason why the above photo has gone viral with many left-wing friends – it supports a world view that validates their own.

Perhaps the biggest challenge that I face then is the task of facing up to the fact that lots of people in Israel and the Occupied Palestinian Territories don’t think like I do. Lots of Palestinians don’t want to accept a neighbouring state of Israel, a lot of Israelis don’t want to share Jerusalem with a future Palestinian state etc etc…*

While I am entitled to my views, as you are yours, I also have to accept the fact that we probably won’t be the ones who ultimately bring about peace. This has to come from within Israeli and Palestinian society (although I think we outsiders can help lay the foundations).

I was acutely aware of this during my time in the West Bank and Israel in 2012 and tried as much as possible to report the words of the people I met and to only offer a human rights framework for their words to help readers contextualise what they were saying. Inevitably though I at times failed and led interviews into the direction I wanted them to go rather than really listening 100% to what they wanted to say.

Equally I noticed on a number of occasions that some Palestinians I was interviewing would self-conform, either out of a sub-conscious desire to please or through strategy, and use peace/human rights language that sat comfortably in my articles but did not necessarily reflect the militaristic rhetoric that I heard in the coffee shops and in the fields when I wasn’t conducting formal interviews.

Since moving away from both Israel and the occupied territories it has become harder for me to put the emphasis on listening to what Palestinians and Israelis have to say on the subject rather than just projecting my own thoughts purely because I am not having daily interactions with them. This is one of the reasons I have been writing much less on the conflict in the last year or so.

All of this said I still think it is important that the international community (that includes you and me) keeps highlighting what is happening and calling for justice and accountability. I also believe that we have a role to play. The most powerful things I think we can do is to highlight the grass-roots efforts to bring about a non-violent end to the occupation. This in my mind includes the powerful story of the Fraenkel and Khdeir mourning families coming together to offer each other support.

The challenge though is how we do this without losing sight of the reality of normal people’s opinions that might sit less comfortably with our own (my own) liberal human rights dominated perspective whilst we cherry pick the few good news stories that make ourselves feel better?

** UPDATE Since publishing this article it has emerged that the photo and the recent story I linked to on Huffington Post are not the same. The photo is from 2013. More here. The story however in the Huffington Post, to the best of my knowledge, is true though.

11 responses to “As Gaza is bombed why do I keep looking for the odd good news story?”