The missing pieces of Jayyus’ jigsaw 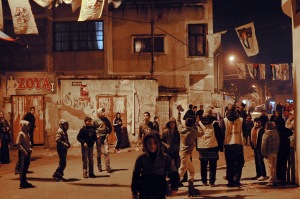 Children are running wild around my feet, unable to decide which is more exciting, the strange foreigner holding a digital camera, or the prospect of finally seeing Ashraf Khaled.

The atmosphere almost reaches fever pitch as rumours spread like wild fire of Ashraf’s imminent return. A car alarm goes off and people break out into a short lived hysteria. The occasional firework flies into the air, the explosion resonates through the narrow village streets and leaves the children delirious with anticipation. For the last week the village of Jayyus in the West Bank has been expecting Ashraf to return. On each anticipated release day, his family would drive to Jenin only to find out at the last minute that they would have to wait for another day or two.

For many of the young boys flittering around my feet they have no memory of Ashraf – many were still in their mothers arms when he was detained eight years previous.  Perhaps this only adds to the excitement – the prospect of the unknown.

The wait is stretched out with small snippets of information being fed to the growing crowd. Someone is sure that he has left the neighbouring village, another comments that he will be here any second. I have no idea what to expect but even I am starting to feel excited.

All of a sudden the suspense spills into carnival jubilance; a procession of cars start to pour into the village. Each car has Palestinian flags and jubilant young men hanging out of the windows, sunroofs and out of places you wouldn’t believe that it was possible to hang. One man leans out of the window holding a box of fireworks firing them into the air. Soon we are encircled with loud explosions as houses all around the village let off fireworks from their flat roofs. Car horns are on permanently, men are shouting trying to be heard over the car horns and feeble stereos try their best to compete. The children, for the first time since I came out onto the street, stand still and watch the spectacle in amazement. The street fills with firework smoke, music, explosions, laughter, and giddy men embracing.

As I stand in the middle of this all, breathing the fresh evening air, I watch a community come together in a public embrace to welcome home a missing piece of their jigsaw. I have long given up asking the reason why anyone is arrested (invariably it is either for ‘security’ or ‘stone throwing’) but on this occasion I venture down this delicate line of questioning. The answer comes back with a cynical sneer. I am told that his brother was killed and he was arrested as a precautionary measure in case his brother’s death ‘radicalised’ him.

In most modern democratic countries this story would be an impossibility or at least it would be considered to be unusual. Sadly, in Israel and the occupied Palestinian territory we know that at least 308 people are currently being held in administrative detention[1]. This is a clear violation of International Human Rights standards. Article 9 of the International Covenant on Civil and Political Rights (ICCPR) clearly states that no person should be subject to , “arbitrary arrest or detention”.

As the parade of clapped out 1980 Subaru Leones file past for the third or fourth time, I start to look beyond the explosions and the loud music and catch the occasional eye wandering into the near distance. On this night one piece of this village’s jigsaw has been returned but many more remain scattered across Israel languishing in prisons. In the last few weeks at least three of the village’s young men have been detained including the Mayor’s son. Each one leaves a hole in the fabric of this close knit community.

It remains to be seen whether Ashraf will fit back into place here or whether his body and mind has been permanently bent out of shape. Tonight the community will welcome him back with a celebration that will go onto the early hours. Tomorrow the sun will rise and cast its light into the homes of all those who have relatives in one of Israel’s prisons. For as long as the occupation continues and Israel pursues its policy of arbitrary detention the jigsaw of villages like Jayyus will remain incomplete.