Another Friday, another protest in Kafr Qaddum 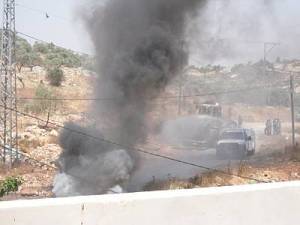 This is a guest article by my friend and colleague David Heap who is currently based in Tulkarm. It was originally published on the EAPPI website.

For the Abu Ihab family, Friday wasn’t too bad. Admittedly there were Israeli soldiers on their roof firing tear gas, they couldn’t leave the house, the sons had been chased down the stairs by armed soldiers and the stink of tear gas and burning car tyres drifted through the room. But Isra’a, the youngest daughter, said they weren’t really afraid today.

Kafr Qaddum is a pleasant Palestinian hillside village of some four thousand people. It has a mayor, a mosque, an elementary school. It had a road joining it to the next village one and a half kilometres away – but not anymore.

Between the two villages are two Israeli settlements, legal under Israeli law, but illegal according to UN Resolutions, which expressly forbid the civilian settlement of lands occupied as a result of conflict. The road was closed for security reasons by the Israeli authorities in 2003. The only security problems the townspeople were aware of were some damage to their crops and olive trees in the early days of the settlement, but all had been peaceful for a good while. Israeli authorities had reportedly promised to re-open the road at the same time as the main road beyond it to Nablus re-opened. This happened two years ago, but their road remained closed.

Since the first of July 2011 the people of Kafr Qaddum have held a demonstration every Friday against the closure, which means a 20 kilometre detour to get to families and friends and a six-fold increase in bus fares for students. It can get very angry, as it had on the 15th of June this year, because the Israeli army had raided the village in the middle of the night before and detained 20 young men. They can be held in administrative detention inside Israel, many kilometres away from their families for hours, days, weeks, months or years, often without trial. If they admit to the claims against them (often stone-throwing) they can be released upon payment of a fine that is around 10,000 shekels (€2000.) A Palestinian going to work in Israel as a labourer or farmhand earns 120-180 shekels per day.

That Friday, it was a game of kids advancing and throwing stones, soldiers dashing forward threateningly with the guns, kids running back, soldiers withdrawing, kids advancing again went on till the main adult procession came up the hill. Tyres had been set alight and were now billowing smoke. The same pattern of ebb and flow was repeated, only now tear gas was being lobbed regularly. Mostly into a field to the side of the demo, but some skittering along the road into the crowd. Men were regularly brought back choking and temporarily blinded and a Red Crescent ambulance zoomed up and down giving aid to the worst affected. One man was hurt more seriously as it seemed his shirt had caught fire and he was burned.

Things quietened down after an hour or so and the procession came back chanting slogans. A quiet enough day we were told. Unlike the previous week there had been no chemically-created “Skunk” water shot from water cannons and no sound bombs, which disorientate and nauseate as well as deafen.

Back in the Abu Ihab house, which is at the outer limit of the village and always caught up in the midst of things, things were now quite calm. The soldiers had left the roof and for once had not cut the television cable. The mother was preparing a huge and delicious meal of chicken, rice, vegetables, pickles, pitta bread, tea and coffee.