The State of Play: Education in Uganda

This is a guest post by Anya Whiteside who is the Education Advocacy Officer at the Forum for Education NGOs in Uganda (FENU).  She is also my partner and her blog can be found  here. 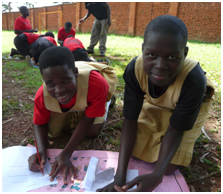 Back in 1997 Uganda was proud to lead the way in the provision of universal primary education. Enrollment boomed from just 2.5 to 8.8 million and this was seen by many as a major success.

Despite this seemingly rosy picture, Uganda is a clear example of how focus on access to education alone is not the be all and end all and is not the same as a good education.

It is generally recognised that in Uganda education is in crisis, a crisis that needs urgent action.

Although enrollment has remained high the drop-out rates in Uganda are also high. Uganda’s completion rates in primary education are only 25%. This is compared to 84% in Kenya, 81% in Tanzania and 74% in Rwanda.

The NAPE report states that for P6 pupils who are at the end of primary school, only 45% of them have reached proficiency in numeracy and only 41% in literacy. As the report starkly puts it ‘less than a half of the P6 pupils have mastered most of the competencies in the P6 curriculum’.

Most worrying of all the results show that education results aren’t improving, and are worse than the results in 2009.

There is not doubt that Ugandan education faces many challenges. Uganda has the second youngest population in the world with 55% of the population under 18 years. When universal primary education was introduced children flooded in to access ‘free’ education with schools and teachers overwhelmed. There are no-where near enough teachers, classrooms, books or sanitation facilities to teach all these children.

It is not uncommon to have teachers attempting to teach classes of over 100 and children taking it in turns to use a pencil. Children often come to school without lunch and so are sat all afternoon hungrily waiting for the end of the day.

But political will is also an important element in this. The percentage share of the Uganda national budget dedicated to education has fallen from 17% in 2007/8 to 15% for 2013/14.

This situation is likely to only get worse after aid donors pulled out after allegations of corruption by the prime ministers office, leaving sizable holes in the education budget.

Funding to government primary schools comes in the form of a grant given per child, per year to each school. On average this is 5,000 Ush (about £1.25) per child per year, so it is unsurprising schools charge parents significant, often unaffordable extras for books and uniforms.

Unlike other countries, where even if they are not paid enough teachers are afforded at least some degree of respect in the local community, in Uganda teachers are considered socially at the bottom of the pile. In government primary schools teachers are paid an average of 260,000Ush a term (£65 a term).

To give you some context, VSO gives me a stipend of 895,000Ush (£223) a month which is meant to cover my basic living costs, excluding accommodation. So you can see that being a teacher is not exactly economically desirable.

When you add to that the appalling delays that teachers experience, waiting months for their salaries due to inefficiencies, it is unsurprising that teachers often don’t turn up or have additional jobs on the side.

Teachers are also not given good training and the style of teaching is extremely reliant on teaching by rote. A colleague of mine told me how she sat in on a teacher training course where the lecturer, with no irony, started by saying ‘in teaching the most important thing is to be interactive and not just talk at students’ and then proceeded to talk at the teachers for several hours.

Teachers are rarely, if ever, inspected and there is little support or ongoing training. On top of this they are blamed consistently for the poor state of education in Uganda – no wonder no one wants to be a teacher!

So is there any hope for education in Uganda?

I would argue that there is, based on all the people I have met who are dedicated to improving education. Everyone knows what the problems in education are and the buzz-word at the moment is ‘quality’ education.

The organisation I work for (FENU) helped to set up the new ‘Parliamentary forum on quality education’. A few weeks ago FENU coordinated the first ever ‘Quality Public Education Week’ which saw Anglican, Catholic and Islamic leaders (70% of schools are linked to religious institutions) come together with trade unionists and politicians. This focus on quality is important, especially as it moves away from only focusing on getting more children into school and also looks at the education those children are receiving.

There are so many different challenges to education here, and I haven’t even touched on child labour, gender inequalities, capital punishment, secondary schooling or vocational training.

Nonetheless there are inspiring people working for change, and no end to the children keen to learn if they are only given the opportunity to do so.