A tribute to Marie Colvin

As 2012 slips into the confines of history, I wanted to pay one last tribute to Marie Colvin – one history’s greatest journalists that 2012 so cruelly took from us. I want to ensure that something of her ethos lives on in my writing. 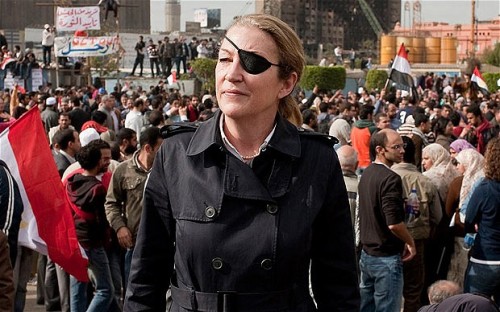 Marie Colvin is one of the 121 journalists who lost their lives in 2012.  She lost her life in Syria surrounded by the same killings, war crimes and atrocities that she had spent her life reporting as a war correspondent.

She not only did a job that many of us would be unable to do, but she did it without losing a sense of humanity in some of the darkest situations.

Jeremy Bowen described her “big reserves of empathy” – something that is so vital when you spend your time examining the worst humanity has to offer.

In a 2010 speech in Fleet Street Marie described the role of a war correspondent saying:

“Covering a war means going to places torn by chaos, destruction and death, and trying to bear witness. It means trying to find the truth in a sandstorm of propaganda when armies, tribes or terrorists clash…

Despite all the videos you see from the Ministry of Defence or the Pentagon, and all the sanitised language describing smart bombs and pinpoint strikes, the scene on the ground has remained remarkably the same for hundreds of years. Craters. Burned houses. Mutilated bodies. Women weeping for children and husbands. Men for their wives, mothers children.

What fascinates and inspires me however is what drove her to then put what she saw down onto paper.

Ingrained in Marie’s writing was a belief, a belief that if the atrocities that she witnessed were recorded and reported then at least there was the potential for action to be taken. Accountability.

If war zones are left without accountability we take nothing into the future except for the loss, anger and desperation which comes to define the bloody aftermath of war.

Marie’s writing acted as a basket to carry the possibility of justice forward. Without accountability, the truth, in all its bloody detail, is left to soak into the cracks of history.

Perhaps part of what drove Marie, and certainly what motivates a lot of my writing and human rights work, is more than just the possibility for action. It is the belief that people care.

In the same speech in 2010 Marie went onto say:

“The real difficulty is having enough faith in humanity to believe that enough people be they government, military or the man on the street, will care when your file reaches the printed page, the website or the TV screen”

I doubt I will find my ways into the war zone of Syria, but I am sure, wherever I end up, there will be human stories to tell. I hope that you, the reader, will also take these words with you.

I do what I do because, like Marie, I trust that you care.

One response to “A tribute to Marie Colvin”